T-shirts, tote bags and tweets: How presidential candidates are scrambling for small donors

You can view this entire article on CNN. 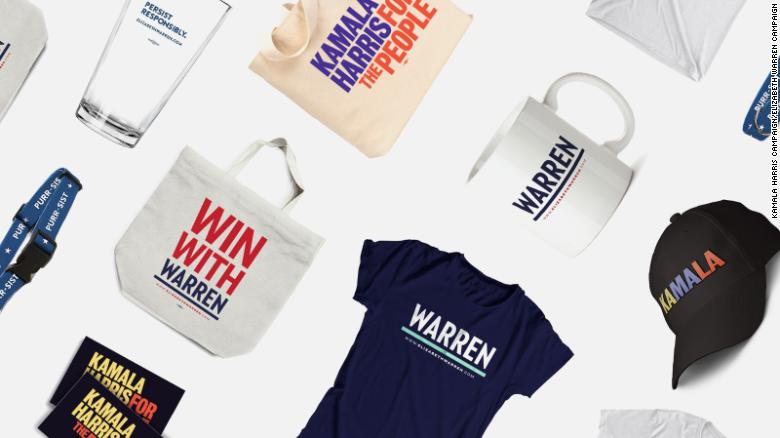 The Democrats running for the presidency are relying on a mix of social media salesmanship and old-fashioned merchandising to scoop up what is fast becoming one of the most valuable commodities in the 2020 presidential campaign: small-dollar donors who they can tap repeatedly to fuel their primary campaigns and a general election fight likely to cost billions of dollars.
As the Democratic Party's early contenders rally around a populist message that rejects big money in politics, they are scrambling to find grass-roots donations to remain competitive in a crowded field. And the party's new debate criteria have made small-dollar donors even more important: In addition to a polling requirement, candidates can also get on the debate stage by receiving contributions from at least 65,000 unique donors. To show widespread support, candidates also must demonstrate they have financial support from a minimum of 200 donors per state in at least 20 states.
"65,000 is not a low number," said Ken Christensen, who runs The Politics Company Inc., a political and fundraising consulting firm in Washington. "Unless you have an organization that can be proactive on your behalf in 20 states, it can become quite difficult to meet that threshold."
Van Jones: I've never seen anything like Bernie Sanders 02:14

Sen. Bernie Sanders of Vermont, who announced his second presidential run on Tuesday, relied on small-dollar donors to help raise a staggering $237 million in his unsuccessful bid for the Democratic nomination in 2016. And the power of Sanders' supporter list was on display this week. On Wednesday, his campaign said it had raised $5.9 million from 223,000 people in the first 24 hours of his candidacy, swamping the fundraising figures announced by his rivals to date.
In all, a dozen Democrats already have announced presidential campaigns or exploratory committees, and several others are weighing bids. All of the major-party candidates have denounced contributions from corporate PACs, and several say they want nothing to do with super PACs, which are independent committees that can raise and spend unlimited amounts to support candidates.
"Small-dollar donors are going to be instrumental in choosing who our Democratic nominee will be," said Erin Hill, executive director of ActBlue, which serves as a central online fundraising platform for Democratic candidates and causes.
"We don't have the billionaires on our side; we have the people," Hill said. "Practically and pragmatically, it's the only way to have enough resources to win."

The new debate rules put particular pressure on lesser-known candidates to step up their digital outreach, whether that means selling kitchen magnets or working to create viral campaign moments that draw eyeballs to politicians' Instagram feeds and Twitter accounts.
Businessman and former US Rep. John Delaney of Maryland has been running for the presidency since 2017, relying on $4.5 million of his own money to fuel his long-shot campaign. And although he's crisscrossed Iowa repeatedly, only about 1% of the respondents to the CNN/Des Moines Register/Mediacom Iowa Poll in December named him as their first or second choices for president.
Even so, Delaney's press secretary Michael Starr Hopkins said he's confident Delaney will meet the debate criteria by achieving 1% or more support in three polls.
"We are aggressively ramping up our digital fundraising, but we expect to be polling above 1%," Hopkins told CNN.
Sanders, who appears to have jumped to an early fundraising lead, is among the candidates using swag to sell his campaign. His online store offers "Feel the Bern" coffee mugs ($15) and "Medicare for all" T-shirts (from $27).
People who purchase campaign merchandise aren't really buying a product under federal rules; they are making campaign donations. Those transactions provide data valuable to candidates: email and shipping addresses and phone numbers -- allowing politicians to hit them up for more contributions and urge them to turn out to vote.
"That's worth a lot more to a campaign than the $10 you spent for the hat," said Michael Malbin, who runs the nonpartisan Campaign Finance Institute.
Just as important, merchandising opens up new avenues to donors, drawing in revenue from people who may not be diehard supporters.
"A lot of people aren't 100% sold on the candidate's platform, but they want the T-shirt," said Bentley Hensel, who runs 1776 Consulting, a political e-commerce firm based in Louisiana.
Share
Share on Facebook Tweet on Twitter Pin on Pinterest